Attention K-Mart shoppers! This is the post with the most made special for all you Beetlejuice MEGA FANS out there. 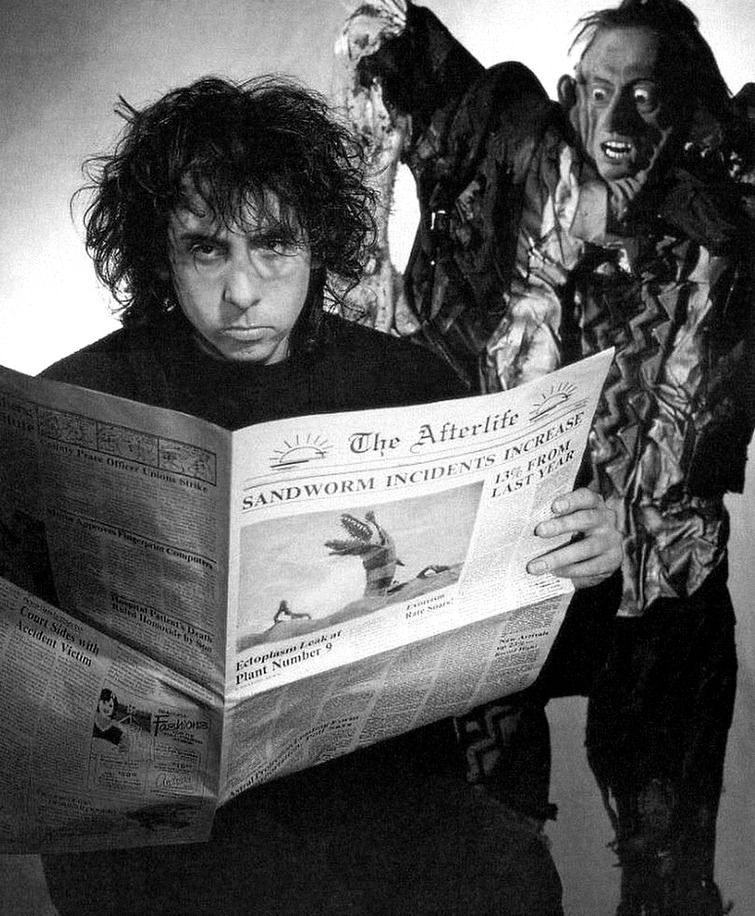 Warner Bros. executives apparently didn’t like the name Beetlejuice and pushed to have it changed to House Ghosts. Lame. Burton jokingly suggested Scared Sheetless as an alternate name, and was appalled when Warner Bros. actually considered it. Thankfully, they came full circle.

Also, Beetlejuice was named for Betelgeuse, a star in the constellation Orion which is likely why there is so much confusion around the “correct” spelling.

Beetlejuice Was Going To Rape, Murder And Fly

Apparently screenwriter Michael McDowell’s original script was a straight up horror flick on par with The Exorcist before being rewritten by screenwriters Larry Wilson and Warren Skaaren. Originally, the story imagined Beetlejuice as a winged demon whose human form was that of a small Middle Eastern man, and his plan for the Deetz's was more about rape and murder vs. mischief and marriage.

Also, the Maitlands’ car crash was planned to be far more gruesome. 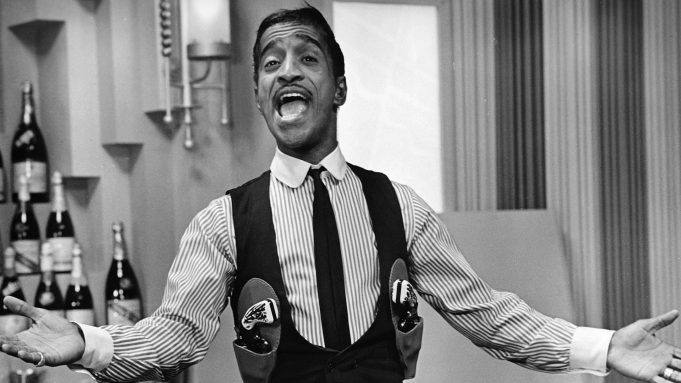 We’re sorry if your head just exploded. It’s true, Tim Burton originally wanted Rat Pack-member Sammy Davis Jr. (who was 63-years-old at the time) to play Beetlejuice. Thank everything un-holy that David Geffen suggested actor Michael Keaton. Obviously Burton was totally OK with the choice, (we all are) since we know Micheal Keaton went on to do Batman and Batman Returns with Burton (and crushed those roles too).

Micheal Keaton has said that his character was described to him by Burton as "having lived in every time period, but no time period." Keaton used this to create the character that features a crazy hairdo, mold makeup, and large teeth.

Keaton told Rolling Stone that once they figured out his look, his approach to the character came together quickly:

"I started thinkin' about my hair: I wanted my hair to stand out like I was wired and plugged in, and once I started gettin' that, I actually made myself laugh. And I thought, "Well, this is a good sign, this is kind of funny." Then I got the attitude. And once I got the basic attitude, it really started to roll." 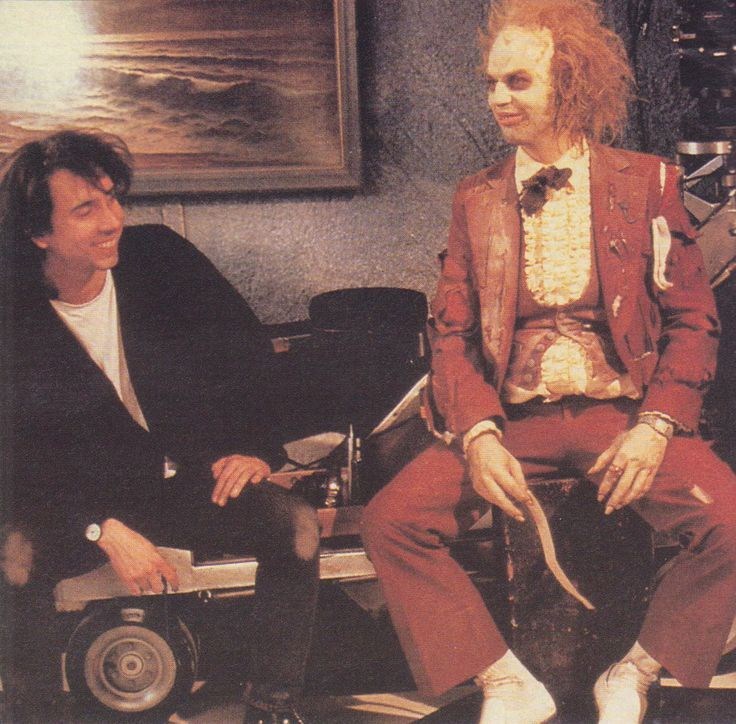 When Keaton first showed up to the set dressed as Beetlejuice the crew began chanting, "Juice, Juice, Juice." This inspired Keaton to do a lot of improvisation during filming which led to a far more “goofy” character than was originally planned.

Beetlejuice Is 17.5 Minutes of "Rage Acting"

Keaton only spent two weeks shooting Beetlejuice and only appears in 17.5 minutes of the 92-minute film.

Despite not spending much time shooting, Keaton completely threw himself into the role telling Rolling Stone:

"At some point, you show up on the set and just go f*ckin' nuts. It was rave acting. You rage for 12 or 14 hours; then you go home tired and beat and exhausted. It was pretty damned cathartic. It was rave and purge acting." 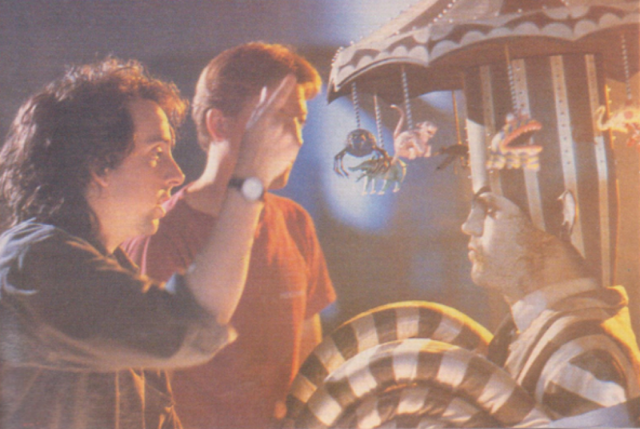 In early versions of the Beetlejuice script, Lydia wasn't an only child. Supposedly she had a straight-laced little sister named Cathy to serve as a contrast to Lydia's mega goth vibes. It's weird to read some of the early drafts of them engaging, but one of the weirdest sister scenes involves them seeing "death rocker" in New York City just before being splattered in blood from head to toe.

Tim Burton didn't want to use post-production effects on Beetlejuice if he didn't have to, so in any scene where an effect needed to happen, the director insisted that the crew figure out how to do it live. For instance, do you remember the scene with Alec Baldwin, where Geena’s standing with his head in her hand?

Of course you remember or you wouldn't be reading this!

Apparently, Baldwin was just kneeling behind a black show card that was cut around his chin. Yep, that's it and it's likely why we see a thicker black line there when he shifts his head around.

Here are also some other glorious photos you may enjoy... 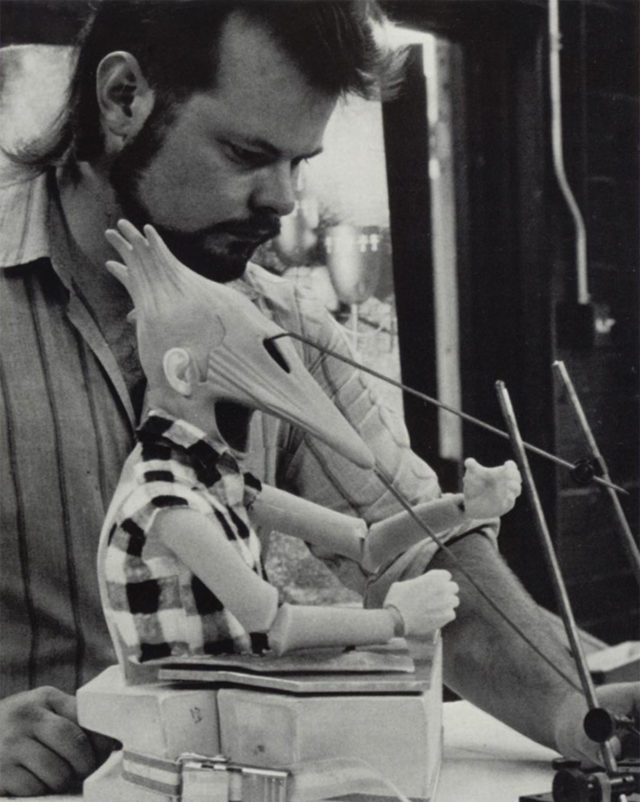 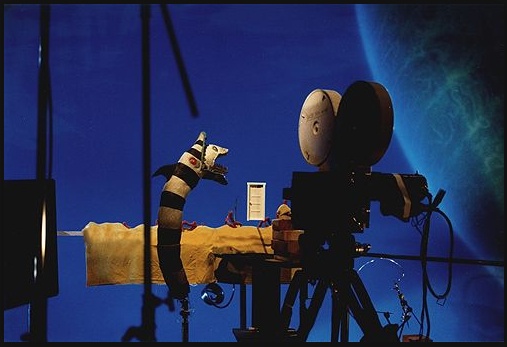 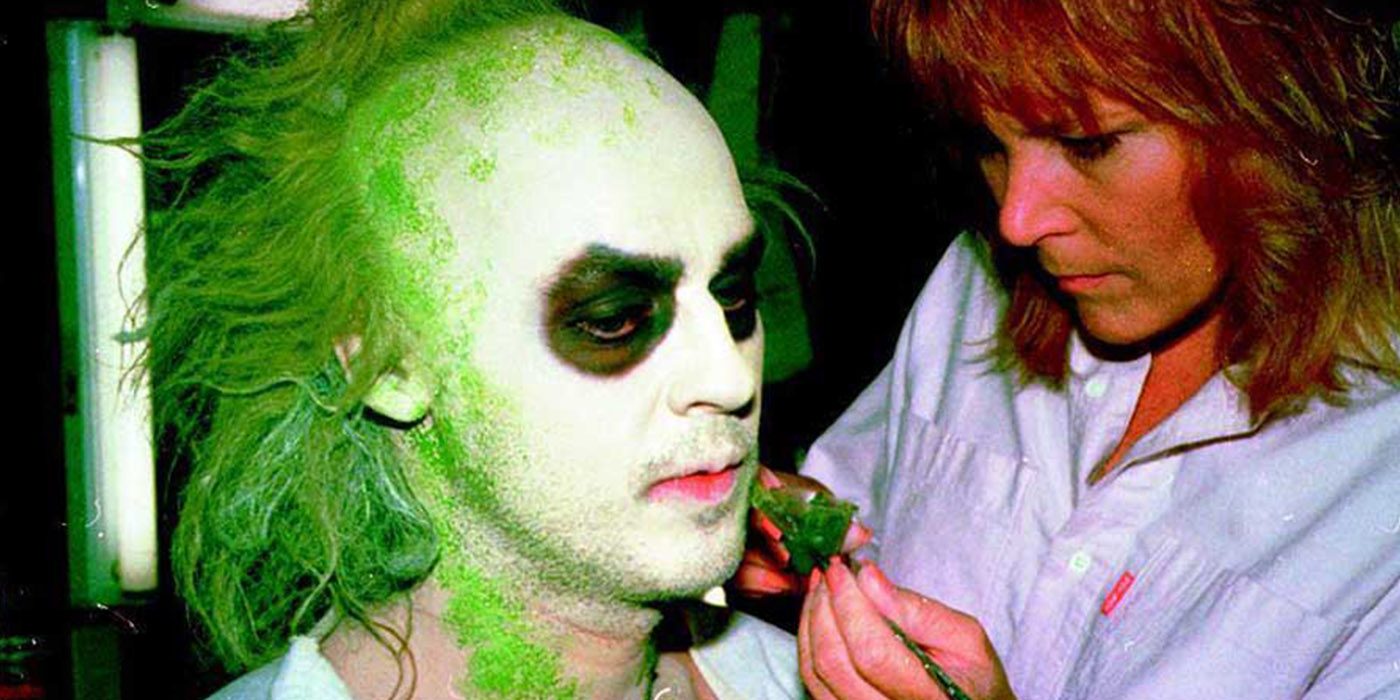 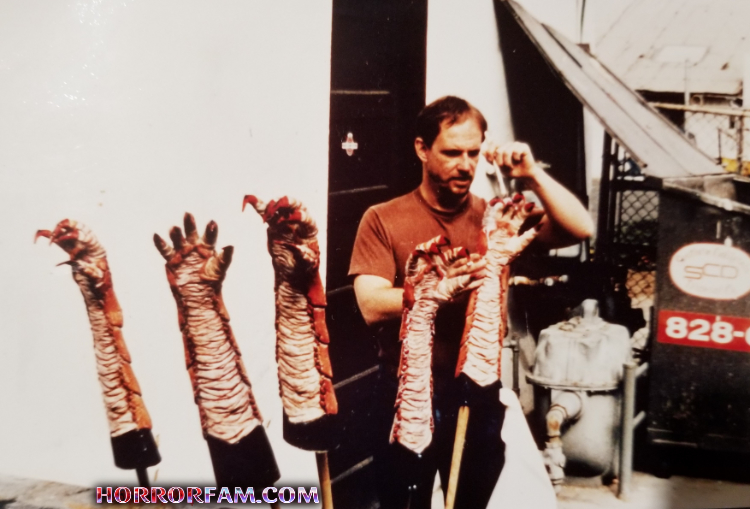 Everyone Was Supposed To “Get What They Deserved”

Beetlejuice: The original script planned to have Beetlejuice taken down during the wedding by a sandworm. No change there. However, the sandworm was supposed to trap and torture him in the Maitlands' model town - for all eternity. This was a no-go since test audiences responded to Keaton's green-haired ghoulie character so positively. Burton's team was encouraged to go back and create something new. Instead, they created the upbeat epilogue we’ve all come to love featuring Beetlejuice hassling a sawed-in-half woman before being hexed by a witch doctor

The Maitlands: The Maitlands originally going to move into the model of their house and renovate it to look like their full-scale version did before the family arrived.

Lydia Deetz: Lydia was just supposed to straight up die in a horrible fire. Yikes. We haven’t been able to find if she sets herself on fire to commit suicide, but she was intended to stay on with the Maitlands in the afterlife.

So, it seems at least someone would have still gotten what they wanted...

Charles and Delia Deetz: Due to the tragic loss of their daughter, the Deetz parents were originally supposed to move back to New York instead of sharing the house with the Maitlands.

Angelica Huston was originally cast to play Delia Deetz, but she bowed out due to an illness. Actress Catherine O’Hara initially declined Burton’s offer for the part, but accepted after Burton flew out to meet with and personally to convince her to take it.

Oh! Also, did anyone else ever notice that Delia is wearing Charles sweater from the beginning of the movie when she’s making dinner? It’s one of our favorite catches at CultSub. Watch this scene again, she turned it upside down and threw some suspenders in to hold it up. 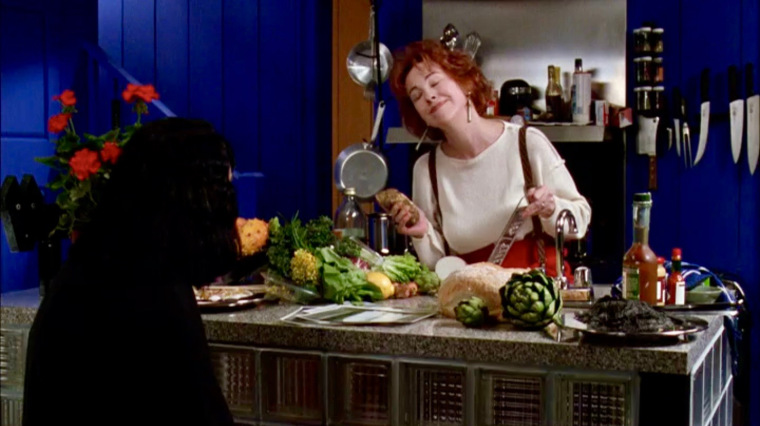 We have to admit, although Beetlejuice and Lydia tend to be the favorites among fans, we don't think that Delia gets enough credit. So, we had to make this for you MEGA FANS out there.... 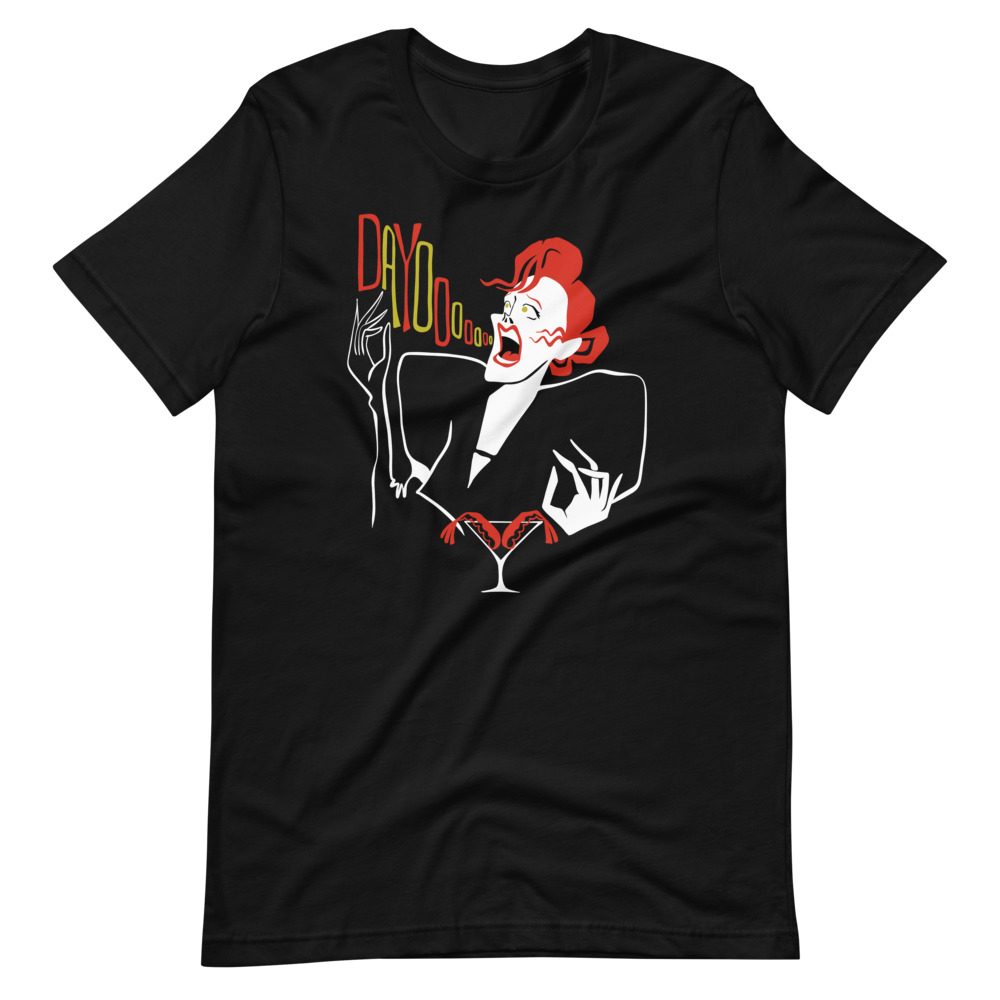 Many Actresses (Thankfully) Turned Down The Role of Lydia Deetz 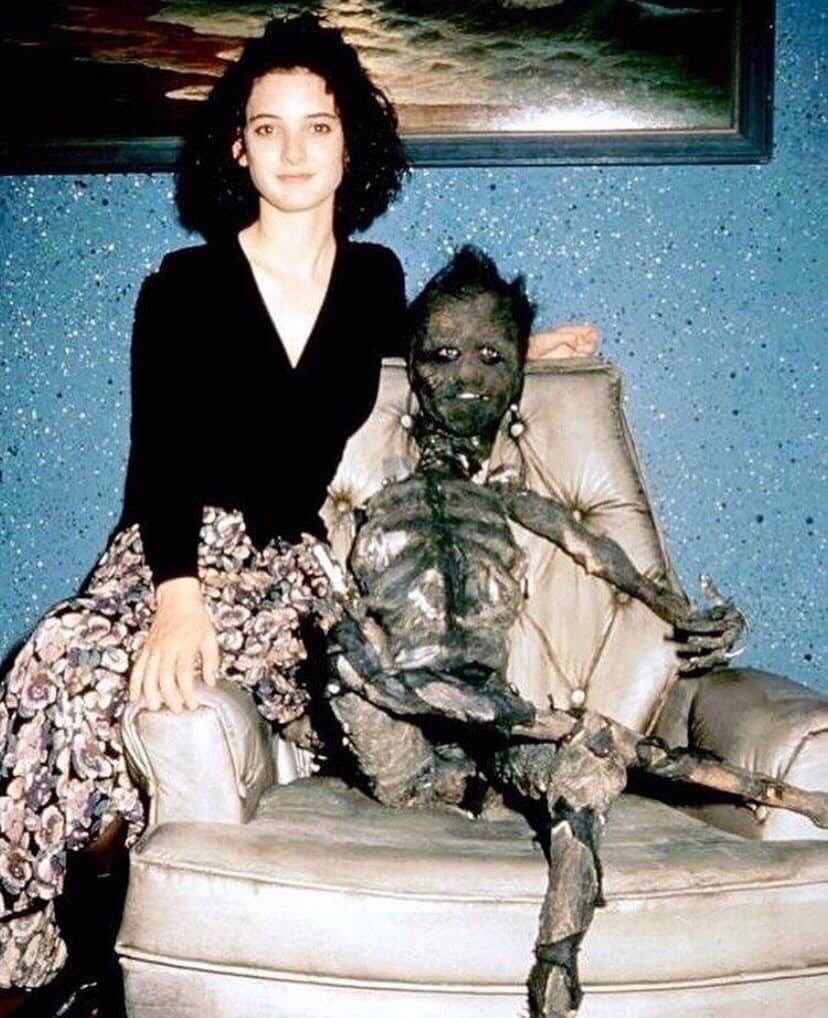 “It's safe to say this, I think I made a contribution to the film. There was a scene at the table. My contribution had to do with the attacking shrimp. They kept shooting it, but the guys under there couldn't really see where their hand was going and they poked each other in the face. There were minor injuries...what I recall is saying was, 'why don't you shoot it in reverse?'...I was hailed as a genius.” 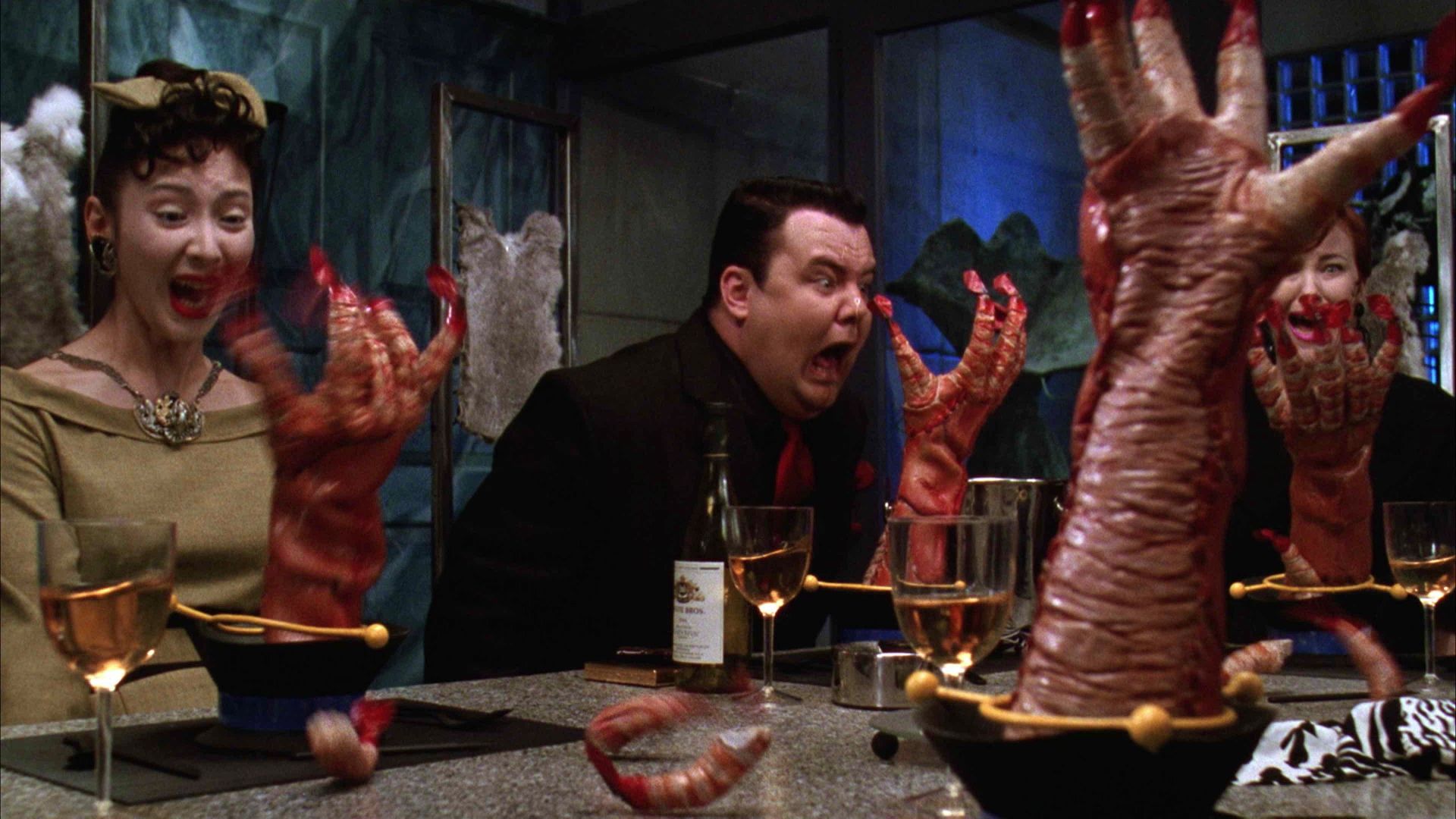 Harry Belafonte’s song “Day-O,” which is in the film’s memorable song and dance number, was the final song played at the memorial for actor Glenn Shadix (who played Otho in the film), who died in 2010.

Beetlejuice Is An Oscar Winner

The Movie Inspired An Animated Spinoff...

A cartoon spinoff was inspired by Beetlejuice and ran for 94 episodes. The show completely re-imagined the relationship between Lydia Deetz and the titular character, having Beetlejuice take her on wild adventures in the Neitherworld. The Maitlands don’t exist in this spinoff, but Lydia got a cast of classmates as well as ghoulish friends like a skeleton bodybuilder and a tap-dancing spider. 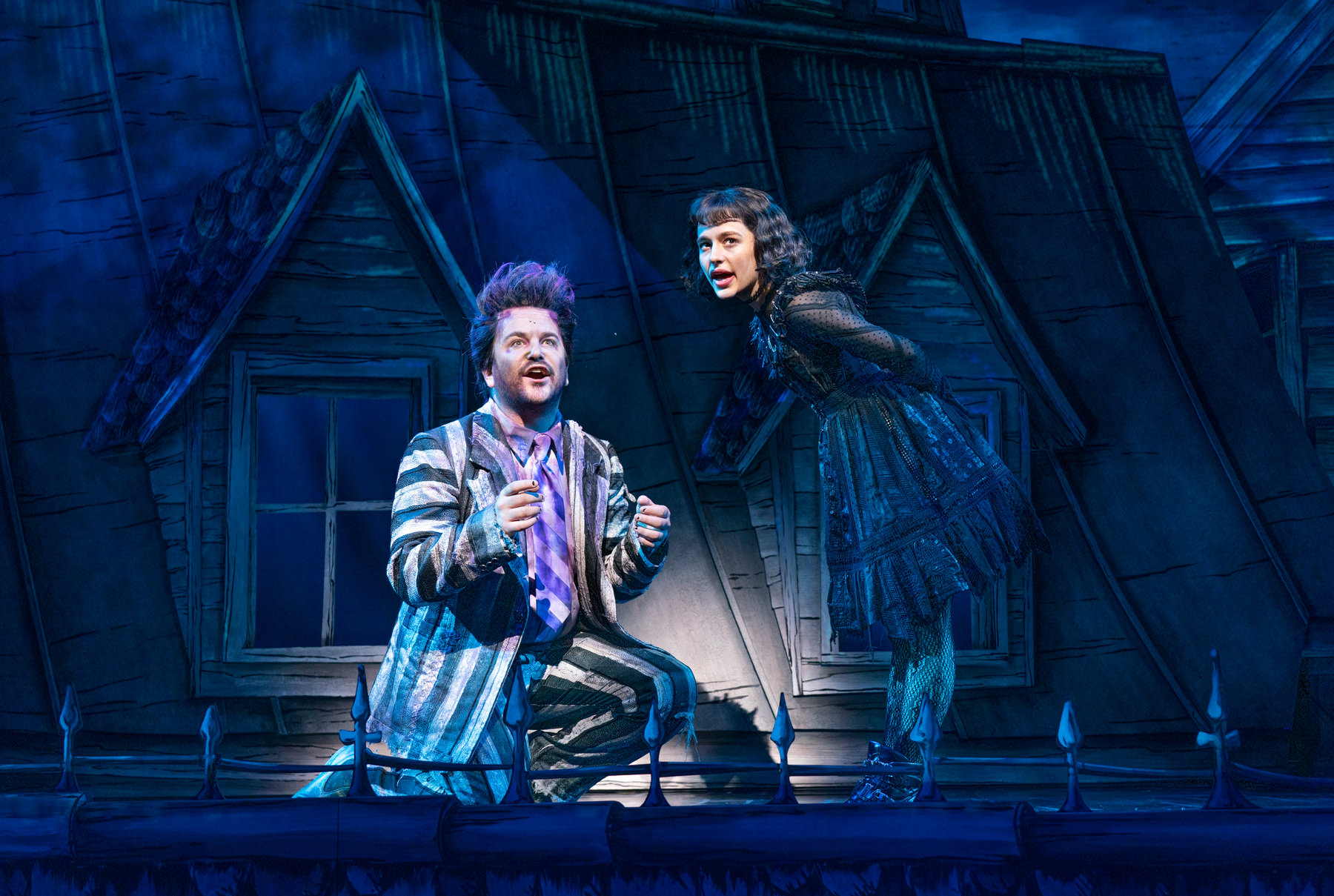 How About A Beetlejuice Movie Sequel...

The box office success of Beetlejuice inspired the development of a sequel in 1990 called Beetlejuice Goes Hawaiian. THANK EVERYTHING that Batman Returns became Burton’s priority at the time, and sequel’s prospects went cold until 2011.

Womp, but it also didn't look good to us.

How about you? Any thoughts? Feel free to comment below with any thoughts, feels or information on Beetlejuice. We'll also take suggestions and ideas for CultSub Beetlejuice T-shirt Collection any time of year via our Custom design form!