The amount of Rick and Morty theories swirling around on blogs, Reddit, social media feeds and even the  CultSub T-Shirts are infinite. Similar to the shows plot line, they’re also so intertwined you could keep pulling on the same thread for days...which we have most certainly done! Obviously, since we have so many Rick and Morty original designs.

However, one theory no one has been talking about are the pink memory tubes mentioned in Morty's Mindblowers. We think something is critical is buried there and have no idea why no one is talking about it. Who's are they? Do they contain Diane's whereabouts? Details of Rick's 20 year absence? Evil Morty's origin story? Rick's Dad?

So many people missed what we think was a critical clue In Morty’s MindBlowers (S.3, Eps.8) as we learn Rick has been taking liberties with Morty’s memories for years. This news is not surprising in the least, but it got us thinking about those huge debates on Reddit discussing Rick’s test tube color assignments in Rick’s secret, memory archive.

YEP, THEY WERE PINK! In all of our online reading and chatting with fellow nerds we haven’t seen a great deal of people mention the pink tubes since they are never actually seen. Morty just briefly mentions them to distract Rick for a moment.

Why The Pink Memories Are Important AF

We've watched this episode with a few friends and either miss this line or just chuckle at Rick’s excited reaction to the mention of booze and move past the fact that there's a dedication section of memories with it’s own bar. Yeah, when you read that is DOES sound like a big deal and it spawns a whole plethora of ideas of who's memories are in those tubes and why they were removed in the first place. I mean, it's not like we don't have some major plot line  cliffhangers right now!

Seriously though, proximity to alcohol alone means that suckers have to mean something to Rick.

Yes, There Were Green and Yellow Memory Tubes

Yes, there were green and yellow memory tubes in Morty's Mindblowers. It seems to be all most people are interested in so let’s quickly address them since they can be seen in the wider shots. We're thinking that it's possible Summer is yellow and Jerry is green. It would make sense in all their time together that Rick would need to do a little editing, right?

..but, then what about Beth?

Why The Pink Memory Tubes Could Be Beth's

Since the pink test tubes are “by the liquor” we immediately thought they were Rick’s, but do we think he would be that “kind” to himself? Knowing what we do about Rick including all the secrets that surround him - some of us think not.

Instead, the pink memory tubes (especially since they are pink) could be Beth’s - his one and only baby girl. How fucked up would it be for Rick to have altered Beth's memories of her childhood in order to "protect" her, or protect the truth of his past. Wubba Lubba Dub Dub, am I right ladies and gentleman?

Additionally, Rick has been called many-a-thing including; a sociopath, sadist, masochist, and so on. So, putting himself first by protecting his story line while also torturing himself by never forgetting his past seems plausible.

UPDATE: The Talking Cat In Season 4 Could Be Another Clue

When Rick erases Jerry's memory of what he saw when viewing the talking cat's brain scan, Jerry exclaims someone needs to remember and Rick responds, "someone will." Dark, ominous and potentially more proof that Rick is all-knowing and

Why The Pink Memory Tubes Are Likely Rick's

We well know Rick is "in great pain" and the question we're waiting to have answered is "why?" However, at Cultsub we're also wondering if someone this dysfunctional with the technology would alter their mind in an effort to gain some "control" - would they?

We think so, and we definitely think Rick would have a liquor stash for drunken late-night viewings.

Emotions Are "Toxic" According to Rick

We know emotions (more specifically emotional ties) are an ‘inescapable curse’ for Rick. We gain some insight into this in Rest and Ricklaxation (S.3, Eps.6). Here Rick uncovers that "toxins" are defined as anything "deemed unhealthy by the individual." So, when Healthy Rick shares he's “too healthy to care” about Morty's well-being (as he shoots him repeatedly) it is confirmed Rick truly does feel relationships are a weakness, but why? Did he come out of the womb this way? Is he even human? Was he well adjusted until Diane broke his heart in some way? Did Beth being a "scary kid" and needing to be contained in Froopyland impacted Rick more than we gathered? Perhaps it's what he experienced fighting the Galactic Federation or the need to "live in hiding" after the war?

Avoidance Is Rick's Way Of Life

For a moment we thought we understood the origin of Rick's dysfunction in The Rickshank Rickdemption (S.3, Eps. 1) as we watch Diane (his wife) and Beth die tragically in his garage. However, we quickly learn it’s a “totally fabricated origin story.” Or is it? You never really know with Rick, but what we do know is that Rick is never forthcoming, projects onto others and straight up peaces out on adventures vs. dealing with his emotions.

For instance, in Rickmancing the Stone (S3, Eps.2), which interestingly follows the only appearance of Diane (despite it not likely being real), Rick is literally chasing power vs. dealing with Beth and Jerry's divorce. He states, "I'm not dealing with it well" while also enabling Summer and Morty to take a major hiatus from real-life.

Repairing, Maintaining, And Cleaning Is Work

In Pickle Rick (S3, Eps.3) Rick is handed an opportunity to deal with his emotions and connect with his family - but hides, projects, attacks and avoids. Classic Rick. However, Dr. Wong's legendary speech summarizes why it's likely that Rick handles his emotions the way he does;

"Rick, the only connection between your unquestionable intelligence and the sickness destroying your family is that everyone in your family, you included, use intelligence to justify sickness. You seem to alternate between viewing your own mind as an unstoppable force, and as an inescapable curse. And I think it's because the only truly unapproachable concept for you is that it's your mind within your control...” - Dr. Wong

Although the monologue goes on in all it's glory, the last line we feel could support our theory although we don't think it's a direct correlation intended by the creators. Although an "unapproachable concept," Rick is aware he is not in control of his own mind. However, extracting memories would provide a sense of control as he's be able to alter his personality, remove "mistakes," cope with pain, and so on.

Also, we see a tearful Rick filming his daughter's birthday in Tales From the Citadel (S.3 Eps.7) and the memory fluid flavoring Simple Rick’s cookies is pink. I guess we could have lead with this...

Can't you just see it? A shot of Rick in the dark, wasted and reliving painful memories with tears welling in his eyes. We're waiting for it along with the same feeling we had in our chests when he tries to commit suicide in his garage after unity leaves him.

Yeah, you know exactly what feeling we're talking about and now you need to listen to Chaos, Chaos as you share your thoughts in the comments section below or, if you're lazy, you can snoop our entire Rick and Morty T-Shirt Collection, broh! 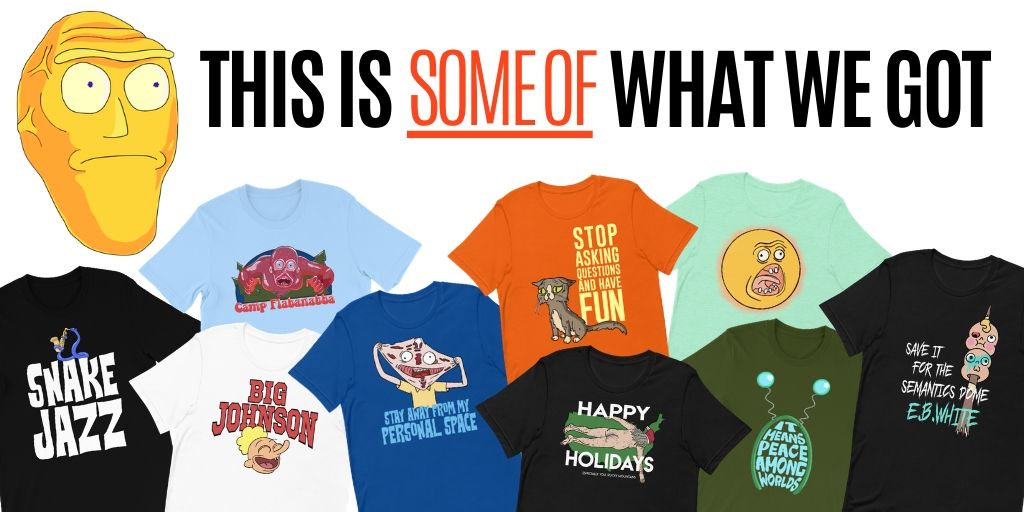 We're drying to hear what you think though...forrealz!